Victorinox is the Swiss knife company that dates back to 1884, when Victorinox's owner's great-grandfather Karl Elsener opened a cutler's workshop in Ibach-Schwyz. Elsener created the Swiss Army Knife: a compact knife with an array of practical functions. Since then, the Swiss Army Knife has solved problems and even saved lives on land and water, in air and in space. Today, quality, functionality, innovation and iconic design still hold the highest priority at Victorinox. Victorinox's name comes from the combination of two words: "Victoria", Elsener's mother who supported his endeavours with his cutler's workshop, and "Inox", the international term for stainless steel. 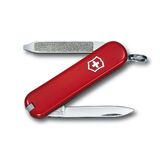